The Eastern Bluebird is a member of the thrush family and a species native to North America. It prefers to be on the edge of open areas, nesting in natural cavities. The pioneering methods of early settlers were very important to this bird’s success in the area. They were commonly sighted in large numbers and well established by the early 1900’s.

Beginning in the 1950’s however, agricultural methods started to change which eliminated many of the nesting cavities critical to the bird’s survival. Dead trees were removed, rail fences replaced by steel and wire and the steady decline of bluebird populations had begun. By the mid 1970’s Eastern Bluebirds were seldom heard or seen and reduced to the point of becoming an endangered species. Replacing the lost nesting sites was to be a major part of any possible recovery for these birds.

Bill Watts was a member of the Kawartha Field Naturalists and keenly interested in the Eastern Bluebirds’ revival. He started building nesting boxes and placed them in suitable habitat around the Fenelon Falls area. The boxes were located along a route easily accessible by foot or vehicle and called a “trail”. The route was thereafter called a “Bluebird Nesting Box Trail”!

After the death of Bill Watts, his family asked the Kawartha Field Naturalists to carry on with his project, generously donating his nesting box trail, library of books and financial support to help maintain boxes and build new ones. This was the beginning of the “KFN Bluebird Nesting Box Trail”.

The KFN formed a committee, did some research and got busy building nesting boxes. Some existing boxes were replaced with most going to new locations where permission was gained from the landowner. The boxes were monitored and records were tallied and reported to the Ontario Eastern Bluebird Society annually.

The KFN membership has been expanding, maintaining and monitoring the trail for more than 10 years now and fledged many young Eastern Bluebirds over that time. The record high year was 1998, fledging 161 birds! The trail expansion has leveled off at approximately 100 boxes monitored each season with an average of 80 to 100 birds being fledged.

The support and participation of the KFN membership is the active ingredient that makes the trail successful year after year. There is some work involved maintaining and monitoring nesting boxes whether it is one in your backyard or a trail with several. It takes time but you will be rewarded with the enjoyment of seeing and hearing an Eastern Bluebird’s song and by knowing that you are helping to re-establish this beautiful bird in Ontario. 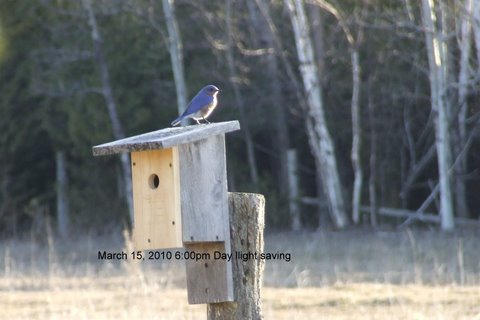 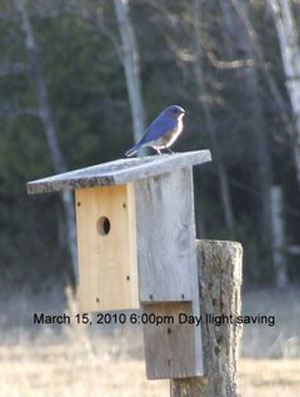 Good news again – our number of young bluebirds fledged has increased significantly over last year! Better overall weather conditions and food supply favoured successful first nestings. These are a major part of having a successful year. Good nest box maintenance and monitoring practices are equally important and our KFN members do a great job at this. It shows in our trail results! Keep up the good work KFN’ers, we sincerely appreciate it.

Now for the numbers as compared to 2006:

We continue to report our counts to the Ontario Eastern Bluebird Society (O.E.B.S.) but are still not receiving any overall results from them. We hope they will become available again soon.

Deer, squirrels, wild turkeys and other regular winter birds have been visiting our backyard but we are really looking forward to seeing a bluebird again. It is only 6-8 weeks before they will be returning to our area! Where did that year go?

Well that wraps up another season. We really enjoy working with everyone on the “trail” and hope to see you out there soon.

Yours in Bluebirding, Louise and Tom Horne

The reports are in and the numbers tallied. Congratulations to everyone who participated on another very successful year for the KFN Bluebird Trail. Good maintenance and monitoring practices helped us keep losses to a minimum in spite of a severely cold week in May. We kept most of the increase in fledglings that we gained last year thanks to the good work of dedicated KFN members. You make it happen!!!

Following are the numbers compared to our 2007 report:

We continue to report our counts to the Ontario Eastern Bluebird Society (O.E.B.S.) but have not received back any overall results from them. They have been making some organization changes which may correct the situation soon.

Well that wraps up another season and it’s only 6 – 8 weeks until the cycle will start all over again! Our Bluebirds will return as early as mid-March so keep a sharp watch for them. You might be the first person to see one back in our area. We really enjoy working on the “trail” with everyone. We hope our KFN Bluebird Trail members will set a new record for the number of birds we fledge in 2009! Good luck to all our participants.

Yours in Bluebirding, Louise and Tom Horne

Tom and Louise Horne have compiled the eastern bluebird nesting results for the KFN bluebird trail and have done the required reporting results for some twelve years. Anyone that has worked with Louise and Tom will agree that they always do a first rate job, whatever the endeavour and are a difficult act to follow! Ruth and I have provided nesting habitat for pairs of common loons and have reported overall loon nesting results to Bird Studies Canada for Four Mile lake for some eighteen years. We agreed to succeed Louise and Tom and to compile and report the details of eastern bluebird nesting for our trail beginning in 2009. Unfortunately it has not been a good year for breeding success due to some backward weather and a few hungry black bears during the nesting season. 2010 will be better! We already have a couple of additional monitors that willreporting nesting results to us in 2010! There are initiatives under way to construct additional nesting boxes and we have requests from a number of our participants for boxes. Many thanks to those of you who have reported nesting results to us this year and we look forward to working with you again in 2010. Please do not hesitate to contact us if we can be of assistance. The following table shows the comparison to the 2008 results.

Many of the boxes were occupied by Tree Swallows and House Wrens. It seems that in summary for this year that “bad weather + bears = nesting unsuccess”. Yours in blue birding, Vic and Ruth Orr

All numbers are up this year!

Thanks to all that shared nesting information. We are pleased to have a couple of additional contributors to our nesting data this year and we look forward to receiving their information in future years.

Thanks to Jim Saigeon’s skills and resources, following Tom Horne’s diagram, we constructed a dozen nesting boxes of the “mud room” design; hopefully these new boxes will be placed in good nesting habitat for the upcoming nesting season.

A highlight for us this year was the Ontario Eastern Bluebird Society Conference in September, held at the Royal Botanical Gardens in Burlington. As the OEBS hosted the North American Bluebird Society this year, it was especially well attended with enthusiastic “blue birders” all the way from British Columbia to Pennsylvania.

As we prepare this report we are reminded that we will be looking out for early bluebird migrants in as little as 3 1/2 months from now!

Once again, thanks to all participants for submitting your nesting results and we look forward to hearing from you again in 2011.

In the meantime, remember the box design is less important than box location as long as the entrance hole is 1.5″ (3.84cm) diameter. See website at oebs.ca

The following table shows the comparison to the 2009 results.

As per usual there were nests occupied by tree swallows, chickadees and house wrens. Two were occupied by flying squirrel nests and at least ten boxes were destroyed by bears.

Yours in blue birding, Ruth and Vic Orr

Recorded below are the 2011 numbers for the bluebird trail compared to those of 2010:

Numbers of fledglings are about the same as in 2010 with an increase of one. Despite the abnormally cold weather during latter May causing a high mortality of birds at a critical time in the bluebird nesting cycle, our numbers were good overall. According to Bill Reid of the Eastern Bluebird Society, “weather above all else has the greatest impact on nesting success during the nesting season”.

We supplied fourteen additional nest boxes during 2011 (new and recycled). As everyone knows, it takes a lot of time and effort to properly monitor and maintain a bluebird trail. The satisfaction gained is however, well worth the effort!

In order to compile and report bluebird trail results, four items of information are required: Number of nesting pairs, number of boxes, number of birds fledged and number of eggs laid. If this information is not supplied, an estimation must be made in order to complete our report. Statistics show that the best nesting success happens when boxes are inspected at least once a week during the nesting season.

It is sometimes interesting if not entertaining when obtaining nesting results from the various monitors. For example, one monitor reported that he opened his nesting box for inspection and a flying squirrel ‘flew’ past his head and landed behind him! Another stated, when asked how many times during the nesting season they inspected their boxes the reply was: “we never open our boxes during the nesting season” (for fear of scaring the occupants away).

Thanks to all for supplying your nesting results; it is you that make this report possible! Hopefully we will visit some over wintering Eastern Bluebirds, some migratory and some resident, in the Carolinas during February/March 2012.

Please note your earliest bluebird sighting in spring and let us know the details so we can record it in our 2012 report to the Eastern Bluebird Society.

Thanks again, Ruth and Vic Orr

Recorded below are the 2012 numbers for the bluebird trail compared to those of 2011:

The first reported sighting of an eastern bluebird in our area this year was by Lizz and Bill Hoyle on March 14th. With our erratic weather patterns these past few years and a warming trend overall, who knows, perhaps an even earlier sighting in 2013?

A well known, award winning eastern bluebird guru, Herb Furniss led a group at the Carden Festival this year. Herb pointed out the ‘do’s and dont’s’ of nesting box monitoring. Apparently he and his helper monitor some 200 boxes around the Carden area. At least one of our KFN members joined Herb’s group and found the experience quite worthwhile.

There are numerous hazards facing nesting bluebirds as you know and the biggest overall is the weather. This spring was unseasonally warm for an extended period followed by a severe drop in temperature. This brought about numerous nest failures among first bluebird nesters. Despite these natural ‘calamaties’ the fauna and flora do prevail, with the resulting casualties.

Our thanks once again for providing nesting information.

Be sure to watch for those early returning bluebirds and have your boxes cleaned out and ready!