The Kawartha Field Naturalists are working in partnership with the City of Kawartha Lakes and the Victoria Land Stewardship Council in a pilot project to promote the value of Provincially Significant Wetlands in the City of Kawartha Lakes. These wetlands provide important wildlife habitat and help to ensure a supply of clean water. The designation Provincially Significant Wetland comes from studies done by the Ministry of Natural Resources. It is determined by the plants and animals found in this wetland along with the importance it has to the watershed.

The City of Kawartha Lakes is blessed with an abundance of wetlands and over 50 of them have been given the designation “provincially significant”. For a map showing these designated wetlands, click here. For information on how the Ministry of Natural Resources determines how a wetland receives this designation, follow this link.

We want to ensure that all members of our community understand how we benefit from these wetlands. We would like to reduce the illegal dumping of garbage that happens in these wetlands and to educate the public about the importance of these wetlands to the health of the environment and therefore to our own health. The project involves placing signs on the city road allowance in a select group of these roadside wetlands and then to monitor the results. To date there are 9 different sites that have been chosen. To see a map of these locations, click here. The red markers on this map indicate the location of the signs.

Also worth noting is that there is a municipal tax break for those that own land that includes any part of a provincially significant wetland. 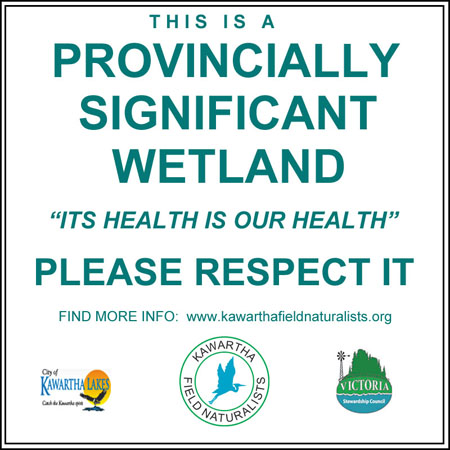 Wetlands are defined as lands that are saturated with water long enough to cause the formation of waterlogged (hydric) soils and the growth of water-loving (hydrophytic) or watertolerant plants. Wetlands are transitional habitats, often forming the connection between aquatic and terrestrial ecosystems. They can occur where the water table is at or close to the surface, in low-lying locations, or along the edges of lakes and rivers. Many wetlands are permanently flooded, while others flood only periodically in the spring or fall – you can often walk through such areas in the summer without ever getting your feet wet!

Provincially Significant Wetlands (PSWs) are those areas identified by the province as being the most valuable. They are determined by a science-based ranking system known as the Ontario Wetland Evaluation System (OWES). This Ministry of Natural Resources (MNR) framework provides a standardized method of assessing wetland functions and societal values, which enables the province to rank wetlands relative to one another. This information is provided to planning authorities to support the land use planning process.

Surface water runoff from cities, towns, roads, agriculture, mining and forestry operations may contain sediments, excess nutrients, viruses and pathogens and/or a variety of chemicals. If this runoff flows through a wetland, the wetland acts like a filter to remove sediments, absorb nutrients and biologically change many chemicals into less harmful forms. “Treatment wetlands” can be specifically designed and constructed toimprove surface water quality, such as artificial wetlands to treat storm water runoff. Natural wetlands can perform the same functions but care is needed not to “overload” these systems. The capacity of wetlands to neutralize harmful substances is limited; too much runoff can degrade or destroy the wetland. For example, too many nutrients (such as phosphorus) entering a wetland can cause algal blooms (eutrophication) which reduces the oxygen content in the water, killing fish and other wildlife, and rendering recreation unpleasant or impossible.

Wetlands can reduce flooding by holding back peak water flows when water levels are high, and storing water within the wetland. This results in more gradual discharges of water over a longer period of time, which can protect downstream property owners from flood damage. A 1972 study by the U.S. Corps of Engineers in Massachusetts determined that the loss of 3,400 hectares of wetland near Boston would result in an increase in flood damage costs of $17 million (US) per year. Re-calculating these costs in today’s dollars would greatly increase the monetary value of these wetlands.

Wetland vegetation along the shorelines of rivers, streams and lakes reduces erosion. Plants trap soils in their roots, helping to stablilize shorelines by dampening wave action and slowing water currents. When such vegetation is removed, efforts to control shoreline erosion are usually expensive, not always successful and can result in further degradation of fish and wildlife habitat. Wetlands and groundwater recharge / discharge Wetlands are essential components of the water cycle and many are a link between surface and groundwater. The level of groundwater (the “water table”) varies depending on the type of soil and bedrock, time of year and climate conditions. A wetland is a groundwater discharge area if water enters it by moving upwards from the soils beneath the wetland or from the upland areas surrounding it. These “discharge wetlands” are ecologically important because they help control erosion and maintain water quality. Conversely, some wetlands act as recharge areas, collecting surface water and allowing it to percolate down through the soil and rock to the groundwater. This water recharge helps to maintain water quality and groundwater supplies, especially during dry periods. This contributes to the water required for essential activities such as human consumption and agriculture. Some wetlands may be discharge areas in the spring, when the water table is high, and recharge areas in the summer, when the water table has dropped. They also contribute moisture to the atmosphere, influencing rainfall patterns. In the absence of wetlands, the summer months would be much drier.

Wetlands provide food, shelter, breeding and resting places for an incredible number of species of plants, mammals, bird, reptiles, amphibians, fish and invertebrates. Wetlands provide the critical habitat that many such organisms need to survive. Game species such as ruffed grouse, wild turkey and white-tailed deer utilize wetlands for at least part of their life cycle. Migratory waterfowl depend on wetlands for survival during their long flight. Many fish in the Great Lakes Basin (e.g., northern pike and muskellunge) directly rely on wetlands for spawning, feeding or protection. In addition, wetlands provide critical habitat for about one-third of all threatened or endangered animal species in North America. In Ontario, wetlands provide habitat for at least 47 plant and animal species that have been identified as “at risk”. 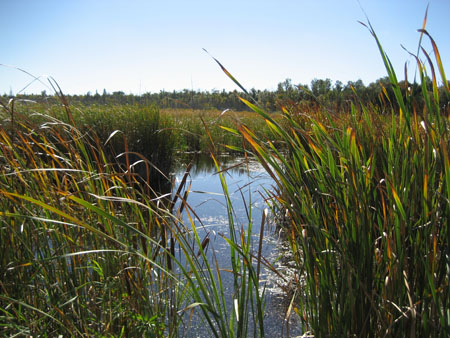