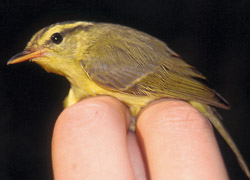 A beautiful olive-green and yellow warbler, resident in forests growing on the rugged limestone karsts of Laos and Vietnam, has been described as a new species. When the Limestone Leaf Warbler was first seen in 1994, it was presumed to be a very similar-looking member of a large genus of Old World warblers, the Sulphur-breasted Warbler. Ornithologists began to question that assumption when the bird was found to be present year-round, and produced significantly different vocalizations. Further research, including genetic work, revealed it is indeed a different species, which is fully described in the most recent issue of the journal Ibis.

The Limestone Leaf Warbler was discovered by a team of scientists from BirdLife International, the Wildlife Conservation Society, Laos PDR’s Department of Forestry, Vietnam’s Institute of Ecology and Biological Resources, the Swedish University of Agricultural Science, and the Swedish Museum of Natural History. Renowned Swedish ornithologist Per Alstrom is the study’s lead author, and undertook most of the detailed genetic research and analytical work; Bird Studies Canada’s Pete Davidson was involved in the discovery, and is a co-author on the paper.

“This is the latest in a series of discoveries made over the past two decades, of more than 10 bird and mammal species previously unknown to science, all of which inhabit the Annamite Mountain chain,” Davidson said. “The distinctive limestone landscape where these animals live is extremely difficult to access, a crucial factor enhancing conservation prospects. While the warbler is thought to be common in its preferred habitat, even forests on limestone karst are under pressure from subsistence agriculture and wood collection, practices that threaten other recently-discovered species.”

The Deafening Silence of the Songbirds