(Don’t miss the pictures at the bottom!)

A dead cow moose was found down the road just off a driveway on Saturday and reported to the MNR. MNR Conservation Officer Mark McKernon caught a nearby calf and it was picked up by Aspen Valley Wildlife Sancturay where she is being well cared for, healthy and hungry. It is thought that the cow died from winter tick, an infestation that causes them to be malnourished, especially in a hard winter. Bearing the two calves may have also contributed to her malnutrition.

The MNR received a call on Monday and Mark came down and found another calf. He wasn’t able to catch this one. It is known that they will come back to the mother so Aspen Valley said they should leave it for the night and they would come back in the morning to check for it. I told him I would also check for it later and in the morning. When I went down at 8pm there was another group trying to find it and had been unsuccessful. We also had a heavy rainfall that may have kept it away.

I went back this morning at 7:30 to see if the calf were around. I was skeptical that it would still be in the area after the heavy rainfall and activity. I sat and waited about a half an hour and then walked to the road. I heard the calf crying and then come out of the bush where the swamp is and across the road towards me and down the driveway. I didn’t want to frighten it and was sure that Aspen Valley Wildlife would be there soon so I decided to stay with it and follow at a distance so as not to frighten or lose sight of it. It kept on crying and eating leaves so I imitated the sound so that it just kept an eye on me but knew where I was. My plan was to just follow it until the wildlife rescue guys came. After almost 2 hours of this (and feeding the bugs) it started to go towards the mother and I gave up on the wildlife rescue team.

I have never been so upset and seen anything so sad as the calf trying to get the mother to get up. It licked and nibbled at her ear. We both had a good cry for her. I decided that was the only chance I would have to get it or it would be gone soon. I approached it slowly with leaves in my hand and while it was distracted made a lunge/grab for its back legs. Residents in the area understandably were anxious to have the dead mother removed so this was last day to catch the calf so I held on tightly.

I hated to do it but having no plan of where to take it I had to drag it to a nearby outhouse and lock it in there. I put a wheelbarrow on the door. I called the Aspen center and they had been here at 6am and not found her. I must have just missed them.

They headed out right away and told me to just leave the calf and she would settle down. She was crying and trying to knock down the door and walls. I was afraid she would hurt herself but he said to leave her and not take a chance on losing her and she did settle/wear herself out just before they got here.

Tony Grant from Aspen Valley said that it would not likely have made it through the night with the cold weather and even though it was eating leaves they would not give it enough nourishment. It is a girl so they are both girl calves.

What beautiful animals to give a fighting chance to.

If you would like to participate in the two little ones care please send a donation to Aspen Valley Wildlife Sanctuary, 1116 Crawford St., Rosseau, Ont. P0C 1J0 or contact them at [email protected]

or send a donation to

We will make a club donation towards their upkeep which is about $100.00 a month for both calves.

Many thanks go out to this wonderful facility in our neighborhood. 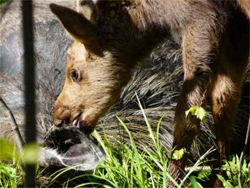 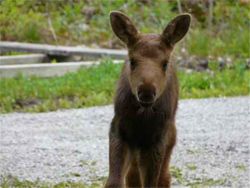 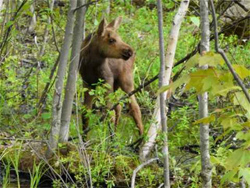 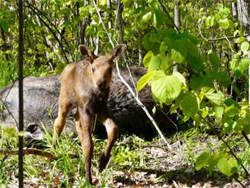 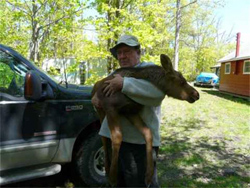 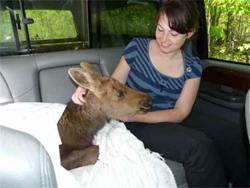 The Land Between Annual Research Forum

Tagged Short-Eared Owl On The Move